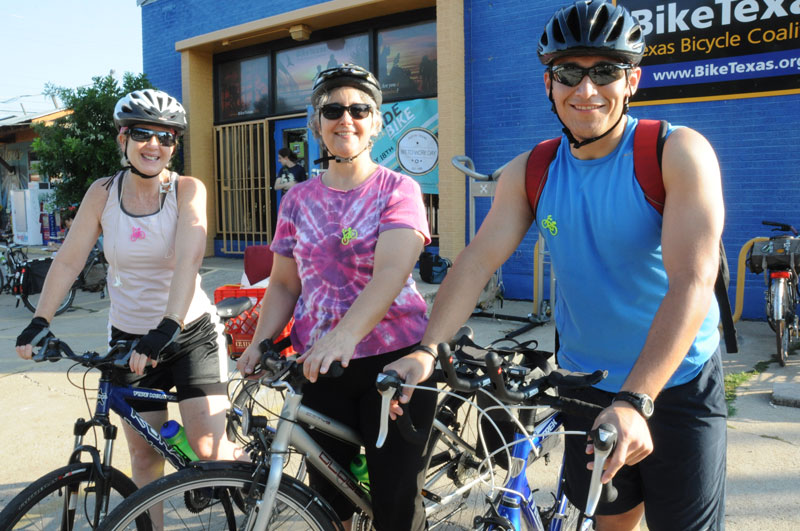 Bike Month came and went in Texas with proclamations, events, and celebrations in cities across the state. From a proclamation and group ride in El Paso, a month filled with walking and cycling events in San Antonio, to cities like Sugar Land and Pearland hosting Bike to Work Day events for the first time, Texas grabbed Bike Month with enthusiasm befitting the Lone Star State.

Other firsts for communities include Richardson’s Bike to Work Day Energizer Station. Bike Friendly Richardson reports that they were able to serve around 24 cyclists and motivate many more commuters to try cycling to work. Jenny Rilling, a Bike Friendly Richardson member, says, “Our goals for our first Bike to Work Day event were to make it for cyclists instead of about cyclists, and to have the event provide inspiration and be a template that other cycling groups can emulate and build off of.” To this end, Jenny says, they put together a “How to Create a Bike to Work Day Event” guide for anyone to use.

BikeTexas’s Public Information & Education program had a great bike month – in fact the best month ever for the program! We gave out more than 80,000 pieces of educational materials for kids throughout the state as part of this Safe Routes to School initiative.

Universities and businesses also got in on the Bike Month action. Texas Medical Center hosted one of three Bike to Work days in Houston, while UT Southwestern and UT Pan-American encouraged staff and students to ride to campus.

On a more sobering note, many Texas cities hosted a Ride of Silence to honor cyclists who have been injured or killed while riding. Participants in the Ride of Silence are asked to treat it as a funeral procession, and also as an opportunity to raise awareness that no one need die on the streets if everyone would share the road.

Seven Texas cities submitted post-ride reports, including the City of Sherman, who hosted their first Ride of Silence event. Altogether, the Ride of Silence had over 1900 participants across Texas (including cities that we know participated but did not submit a report to the website).

Altogether, at least 19 Texas cities had events for Bike Month. We’re already looking forward to Bike Month 2013! In the meantime, you can make every month your own Bike Month just by getting out on your bike!

MISSION BikeTexas advances bicycle access, safety, and education. We encourage and promote bicycling, increased safety, and improved conditions. We unite and inspire people and provide a cohesive voice for people who ride bikes in … END_OF_DOCUMENT_TOKEN_TO_BE_REPLACED