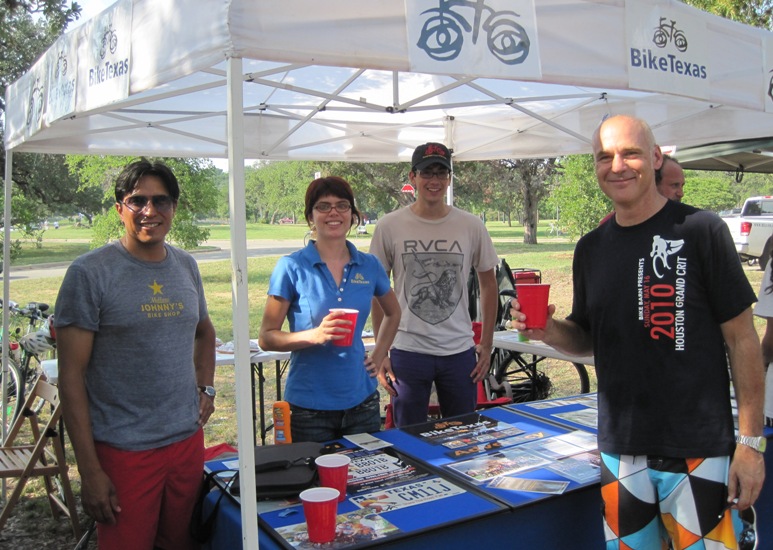 The Austin Bike Month Closing Celebration was my first event as a BikeTexas intern, and it was certainly a memorable one. Though unfortunately for me, I wasn’t in town for most of Austin’s Bike Month festivities, I was happy to be there to celebrate with a town that loves bikes. The closing celebration, held at Zilker Park, brought out every type of cyclist you could think of: from the casual to the spandex-bedecked cyclist, from the recumbent to the fixed gear riders, the whole scene was out and it looked like everyone there had come by bike.

Bike shops Bicycle Sport Shop, Mellow Johnny’s, Fast Folks, Jack and Adams and Longhorn Bikes came out to support the event, and free beer from Real Ale and sandwiches from Thundercloud Subs kept everyone going through the Texas heat. The bike racks were full and everyone was having a great time.The trick ramp was up and every few minutes I spotted some rider cutting through the crowd, rocketing twenty feet in the air and then abruptly dropping back into the crowd.

On top of all of the regular commotion, the Austin Commuter Challenge was brought to a close with The Circle C Ranch Cycling Club clocking in some 1,409 trips to take first place. (BikeTexas fielded a team in the Commuter Challenge, and finished a respectable 10th out of 58 teams!)

A lot of folks came by the BikeTexas booth and said hi. Everyone was friendly and curious, and we even signed up some new members. Other nonprofits participating were Please Be Kind to Cyclists, the Yellow Bike Project, the League of Bicycling Voters and the Austin Cycling Association. In a friendly gesture to the nonprofits, the tip money was donated to them.

As the third band of the day started, the sun dipped low, and the crowd migrated to the stage. By the time the band finished playing the beer and sandwiches had run out and people were hopping on their bikes to head out. Though sun soaked and sweaty, everyone was happy after a great bike party.

Intern Ben Parafina at the event, picture second from right

MISSION BikeTexas advances bicycle access, safety, and education. We encourage and promote bicycling, increased safety, and improved conditions. We unite and inspire people and provide a cohesive voice for people who ride bikes in … END_OF_DOCUMENT_TOKEN_TO_BE_REPLACED