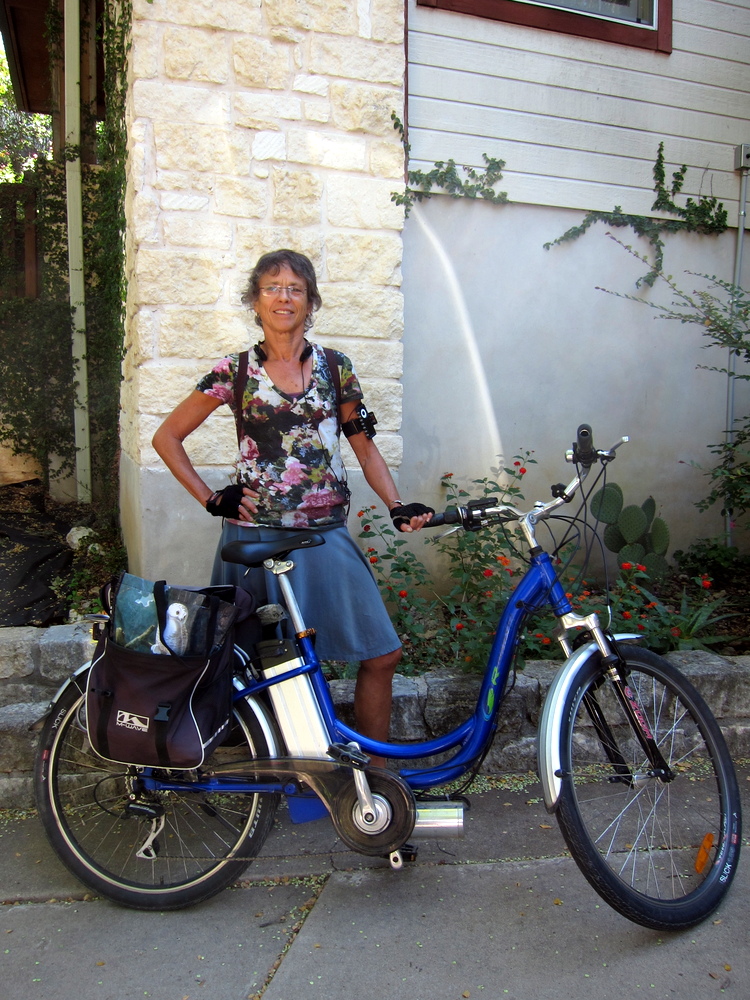 “When I walk, I miss the feeling of the wheels moving me through space.”

Lorn MacDougal—dancer/Pilates instructor, electric bike owner, Austin resident, and BikeTexas member—says she started riding a bike when she was a kid and never stopped. “I hope that parents will instill the skill and bravery in children to ride together as families so children grow up on their bikes.”

Lorn switched to an electric bike about three years ago to make it easier to get to all her teaching jobs. She and her husband share one car so they can save money for more fun things, like vacations. She’s ridden a bike in plenty of cities, including New York, London, and Amsterdam. “Fifty percent of our going to Amsterdam was so we could ride a bike for transportation,” she says.

Lorn supports BikeTexas because “we need all of the help we can get to get the message out to people that it is possible to bike in our car-centric country,” she says. “And BikeTexas working with TxDOT is an important function. We need TxDOT to see transportation as more than highways. If we can get more people on bikes it will make a dent in our traffic, at the same time as making two-wheeled transportation safer in numbers.”

In the ‘80s, Lorn and her husband Alain Le Razer were among the first artists to put film and dance together for the stage, touring internationally. Lorn and Alain continue to produce dance theater and films for Austin audiences.

“You don’t see many old ladies on bikes,” she says—Lorn is 65—“but the electric bike can help older people. It’s wonderful to see an older body that hasn’t exercised much really make progress. Even with an electric bike, you still get a cardio workout because you have to pedal. It’s a delicous way to move!”

Lorn likes the progress that has been made in Austin during her six years here to give people who walk or ride bikes dedicated space in our road network. But she also says there’s more work to do to make everyone be truly safe while riding, both elderly and young alike. “I’d love to see more schools benefit from buffered bike lanes like the ones on Bluebonnet Lane near Zilker Elementary,” she says. “Moms get stuck in cars all day when they could be taking their kids to school, lessons, and activites on bikes.”

MISSION BikeTexas advances bicycle access, safety, and education. We encourage and promote bicycling, increased safety, and improved conditions. We unite and inspire people and provide a cohesive voice for people who ride bikes in … END_OF_DOCUMENT_TOKEN_TO_BE_REPLACED