You are here: Home / BikeTexas BikeNews / BikeNews; Advocacy / What Can I Do: On the Road 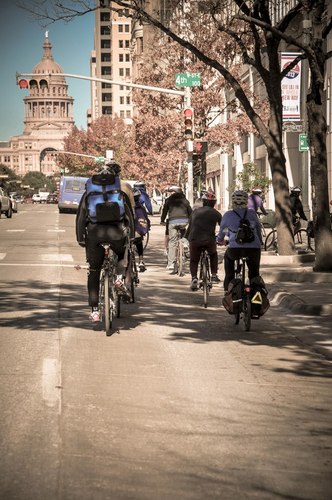 Often, the best ambassador for bicycling is a friendly person on a bike. It’s ridiculous that a motorist who thinks nothing of speeding or rolling through a stop sign will rant about a someone on a bike scooting through a red light a few seconds early, but unfortunately, that’s where we are right now. Some drivers will never be convinced that a bicycle is a legitimate vehicle that has the same rights to the roadways as cars do, but for those who are open to persuasion, a little polite cycling goes a long way.

Please also remember that one of those ranting drivers may be your representative home for the weekend, or a reporter who would love nothing better than to dig up some dirt and write a cyclist-bashing story. While some drivers exhibit inexcusable behavior on the roads, the more people on bikes who are friendly and courteous, the better off we all are. This is also good to keep in mind if you’re cycling through Austin. There are new legislators who are not accustomed to seeing so many bicycles on the streets–as far as it depends on us, let’s show them that cyclists are the responsible road users that every operator should be.

If you’re riding on or near the Capitol grounds, slow down even more than usual and show an extra measure of consideration for pedestrians–especially those in suits talking on a cell phone while darting across the road without looking first. No one wins in a shouting match about who had the right-of-way.

No one wins a shouting match, but if you come across someone who is genuinely interested in hearing a cyclist’s point of view, don’t pass up the opportunity! The best thing to do is to invite him or her to join you on a bike ride, but if you can’t do that, talk about the things we need: Space on the road, courtesy from other road users, and dedicated infrastructure.

If you use a camera while you ride, invite your friend to watch how closely some motorists will pass. If you don’t have your own camera, you can find plenty of video online from other cyclists. (Using a camera also encourages good behavior on the part of the cyclist, since the recording goes both ways!)

A common complaint from angry non-cyclists is that bicycles don’t pay to use the roadway. This comes from a misconception that gas taxes, registration fees, and similar “user fees” pay for roads by themselves. Nationwide, though, those fees pay for about 51% of road construction and maintenance, with the rest of the money coming from other sources that we all pay into.

There are plenty of resources available online to answer almost any question your friends may have about cycling. Try the BikeTexas website, the League of American Bicyclists, or your local bike group for the information you need.

MISSION BikeTexas advances bicycle access, safety, and education. We encourage and promote bicycling, increased safety, and improved conditions. We unite and inspire people and provide a cohesive voice for people who ride bikes in … END_OF_DOCUMENT_TOKEN_TO_BE_REPLACED