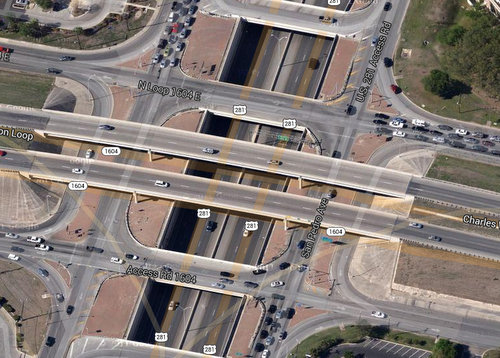 On August 21, 2013, in what was the culmination of a months-long process of advocating for bicycle accommodation on Loop 1604 access roads, the Alamo RMA Board unanimously approved the construction bid for re-striping the road to accommodate a wide outside lane and include signage to alert motorists to the presence of bicyclists.

Prior to construction of the interchange at Loop 1604 and US 281, the access road had an 8′ wide shoulder used by many people riding bikes for transportation and recreation. During construction, TxDOT’s requirement of three travel lanes instead of two was accommodated by removing the shoulder. After local cyclists alerted BikeTexas to this issue, BikeTexas helped rally dozens of cyclists to attend Alamo RMA Board meetings in February and April 2013.

At first response, engineering staff at the RMA discussed the possibility of a bike lane and bicycle accommodation on the sidewalk where road widths did not allow for a minimum-width bike lane. However, those staff left the RMA during the transition to Bexar County providing staffing for the RMA. BikeTexas subsequently worked with staff at Bexar County, now in charge of RMA operations, to come to agreement over how to accommodate cyclists.

“I’m disappointed…but am not surprised,” said Justin Moore, local cycling advocate and LCI, via email when informed of the final design presented by the RMA. Mr. Moore was the first to contact BikeTexas about this issue.

Many in San Antonio have expressed regret over recent road “improvements” that have made things more dangerous for cyclists, such as this access road losing its shoulder. The City of San Antonio and TxDOT both have policies in place that people on bikes should be accommodated in all road projects. The road was safer for people on bikes with an 8′ shoulder than a 14′ outside lane shared with cars.

A future project along the 1604 corridor could improve the situation. Early projections of what will be included in the build proposal of a project to widen 1604 from I-35 to Bandera Rd include multi-use paths on each side of the corridor to safely accommodate both bicycle and foot traffic.

BikeTexas is remaining vigilant to review any plans for this corridor and will alert our networks of any chance to comment.

In the meantime, if you are unhappy with the reduction in safety of bicycling along the access road of 1604 between 281 and Blanco, BikeTexas encourages you to contact TxDOT and file a complaint or email the Alamo RMA at info@alamorma.org.

MISSION BikeTexas advances bicycle access, safety, and education. We encourage and promote bicycling, increased safety, and improved conditions. We unite and inspire people and provide a cohesive voice for people who ride bikes in … END_OF_DOCUMENT_TOKEN_TO_BE_REPLACED