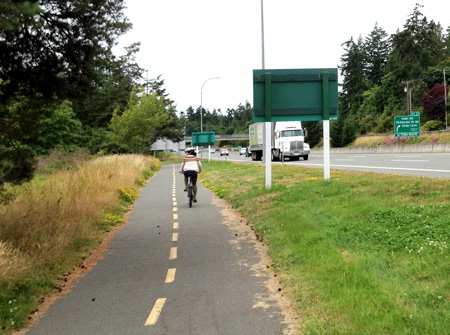 Input at over a dozen TxDOT meetings from BikeTexas board members, individual members and staff as well as other Texas bicycle advocates has resulted in bicycle and pedestrian provisions in TxDOT’s first Texas Rural Transportation Plan (TRTP) 2035, adopted by the Texas Transportation Commission (TCC) on June 28, 2012.

The rural plan is a component of the TxDOT Statewide Long-Range Transportation Plan (SLRTP 2035), adopted by the TCC in 2010, focusing on the transportation needs of rural Texas.  Both plans provide a blueprint for TxDOT for providing for rural and urban Texans’ travel needs, and include requirements for revisiting and updating each report every four years.

The plan outlines of the needs of cyclists and pedestrians and is a significant step toward routine inclusion of bike/ped infrastructure in road projects. In particular, Section 2.5.1 (report pages 23-24) of the report discuss mechanisms and benefits of a Complete Streets approach, which is “the potential to create bicycle and pedestrian infrastructure during roadway construction projects at a small fraction of the cost required to build such infrastructure through standalone projects.” For purposes of the TRTP 2035, Rural addresses those parts of Texas that are not part of a Metropolitan Planning Organization (MPO) area.

BikeTexas encouraged members statewide to attend key first-round meetings about the plan; additionally, TxDOT publicized all of the early meetings and later regional meetings, so that cyclists were in attendance at all of the first-round meetings and many of the regional ones. As a result, TxDOT was able to hear the needs and concerns of those seeking alternate transportation throughout rural Texas.  Meetings for input for the next update of the Long-Range plan are scheduled to start in 2013.

MISSION BikeTexas advances bicycle access, safety, and education. We encourage and promote bicycling, increased safety, and improved conditions. We unite and inspire people and provide a cohesive voice for people who ride bikes in … END_OF_DOCUMENT_TOKEN_TO_BE_REPLACED