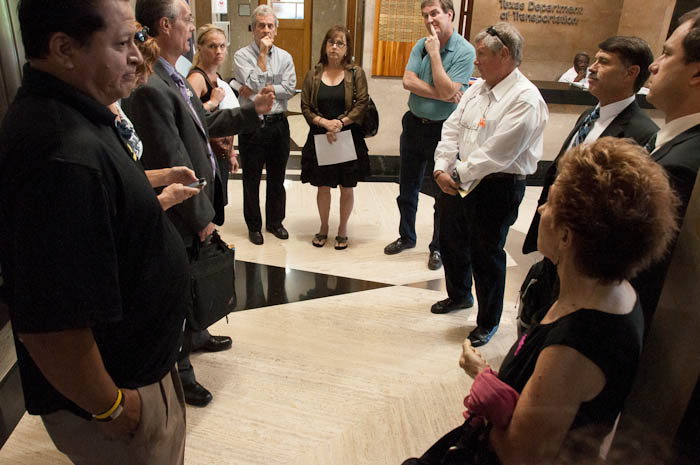 Yesterday, the Texas Transportation Commission listened to testimony from Texas cyclists asking the commission not to ban cyclists from toll roads. The Commission chose to ignore the testimony—that there is often no alternative route, that toll road shoulders can be the safest place for bicycles to be in an area, that cyclists need access to their destinations just like everyone else—and voted 5-0 to ban bicycles from all TxDOT-controlled toll roads.

BikeTexas is disappointed and frustrated by this decision. We feel that the commission has arrived at this decision without any real study or planning. They did not consult stakeholders, engineers, or the available science before shutting down the conversation. We worry about the larger issue at stake: that TxDOT would make these kinds of decisions that affect thousands of Texans without any kind of process.

We believe it sets a dangerous precedent for the state’s transportation department to be run this way. Texas has a reputation for being a welcoming, inviting state to live and do business in. Many of today’s Texas business owners want to hire creative class workers, and those workers seek a quality of life that includes bikeability.

The Commission insists that this decision was made out of concern for cyclists’ safety. However, it does not seem to be truly a safety issue when a law is applied to one road and not another. Different rules on different roads breeds confusion for road users, and ultimately, disrespect for the laws that seem to be arbitrary. In addition, TxDOT’s own Toll Operations Division admits that there have been zero cyclist fatalities on toll roads, so no safety issue appears to exist.

Commissioner Jeff Austin commended the cyclists present for having passion for our issue. However, yesterday the commission were the ones ruled by emotion while the cyclists testifying presented facts and experience. Unfortunately, those facts were overruled by the TTC’s feeling that this must be dangerous. Ignoring the evidence, the TTC issued a blanket ban from all main lanes and shoulders of TxDOT-controlled toll roads.

The Commission was quick to assure us that this ban only affects five roads: Loop 1, SH 45 and 45 SE, SH 130 segments 4 and 5; all in Central Texas; SH 99 in Chambers County; and SH 255 in Laredo. But all Texas communities value having the freedom to participate in decisions that affect them rather than TxDOT dictating what they should do with no allowances for differences in regions, communities and roadways.

BikeTexas is committed to safety and access for all Texas cyclists. We will continue to work and fight to ensure we have our rights to all Texas roads. This defeat will not deter us from our mission.

MISSION BikeTexas advances bicycle access, safety, and education. We encourage and promote bicycling, increased safety, and improved conditions. We unite and inspire people and provide a cohesive voice for people who ride bikes in … END_OF_DOCUMENT_TOKEN_TO_BE_REPLACED