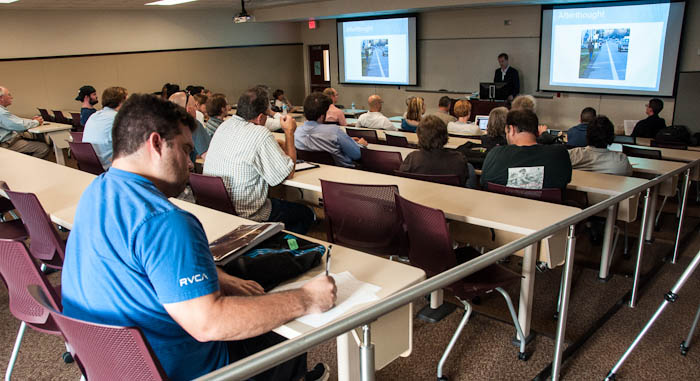 On October 25, transportation advocates from around the area gathered at Texas State University for the “Great Streets in Small Towns” symposium.

BikeTexas’ Robin Stallings took the podium to talk about the things BikeTexas is working on for all Texans, including the BikeTexas CATS program, our educational materials, and the push for a Complete Streets bill in the legislature.

Tracy Hadden Loh of the Rails to Trails Conservancy (RTC) spoke about the need for trails in small towns and rural areas. She talked about the push back that the Conservancy occasionally hears, and “nobody bikes here” reasoning that comes from many in more isolated areas. Tracy demonstrated the “Beyond Urban Centers” tool on the RTC site that holds valuable information about cycling and walking in areas outside of major cities (scroll down on the page to reach the interactive map). The map includes tools for finding fatalities, health data, infrastructure, and stories about great rural transportation across the U.S.

Finally, Dr. Jennifer Duthie of UT Austin’s Center for Transportation Research spoke about her research on cyclist and pedestrian behaviors. She shared the results of a cyclist study conducted via smartphone app in 2011, which showed many desire paths where cyclists are choosing the path that seems easiest, rather than an officially designated path.

Attendees at the symposium were also entered into a door prize drawing for a new BikeTexas jersey.

MISSION BikeTexas advances bicycle access, safety, and education. We encourage and promote bicycling, increased safety, and improved conditions. We unite and inspire people and provide a cohesive voice for people who ride bikes in … END_OF_DOCUMENT_TOKEN_TO_BE_REPLACED