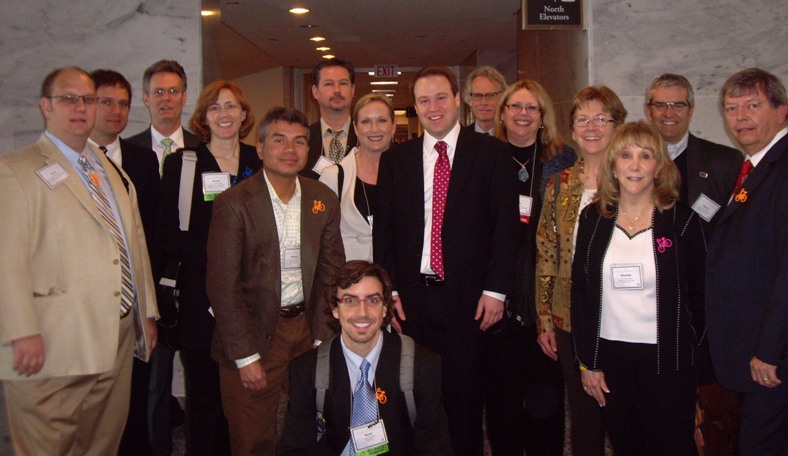 With more than 725 attendees at this year’s League of American Bicyclists National Bike Summit, the 2010 Summit was the biggest yet! From March 9-11, BikeTexas staff joined a diverse group of BikeTexas members, bike retailers, and professional and citizen advocates from all over Texas. The goal? To share ideas with cyclists from around the country, and then to visit our elected officials to let them know cyclists’ legislative priorities. Oh, and to have a little fun hanging out with more than 700 fellow cycling advocates!


The Summit kicked off on Tuesday, March 9 with an opening reception and a welcome video from Lance Armstrong. Then on Wednesday, March 10 the Summit began in earnest. Attendees enjoyed a wide variety of breakout sessions, on topics that ranged from distracted driving to Safe Routes to School, and from the role of retailers in bicycle advocacy to bicycling and public transportation.

Thursday, March 11 we got down to the business we had come to DC for: lobbying our elected officials. Our group of 15 Texans started off the morning meeting with Shay Wester, the staff person covering transportation issues for Senator John Cornyn. Our scheduling difficulties prevented our meeting with Senator Kay Bailey Hutchison, so we headed over to the House office buildings for a full day of meetings.

We had meetings scheduled with 25 out of the 32 Texas representatives’ offices, and even managed to wrangle a couple more meetings on the spot. The majority of the meetings were with Congressional staff members (members of Congress are so busy they will seldom meet with groups unless a constituent of theirs is attending, and even then they may not be able to fit them in). Two groups did get to meet with their Congressman in person however: Congressmen Ralph Hall of Rockwall and Congressman Lloyd Doggett of Austin both took time out of their busy schedules to meet with us in person.

At these meetings, we were asking the legislators to support HR 4722, the Active Community Transportation (ACT) Act. This bill would attempt to shift trips to biking and walking by offering competitive grants to communities to build out their active transportation networks. Half of all trips in the United States are three miles or less, and yet the majority of them are completed by car. By helping communities make their streets and trails safer and better connected, this bill would help encourage people to make those trips by biking and walking.

MISSION BikeTexas advances bicycle access, safety, and education. We encourage and promote bicycling, increased safety, and improved conditions. We unite and inspire people and provide a cohesive voice for people who ride bikes in … END_OF_DOCUMENT_TOKEN_TO_BE_REPLACED