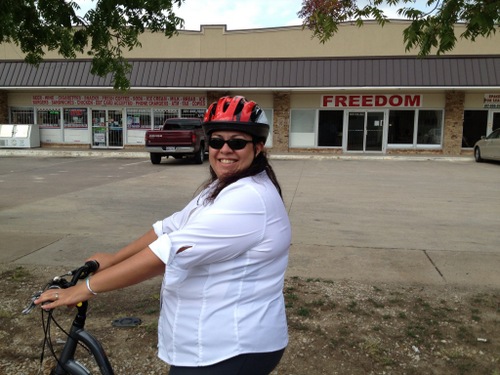 The Texas Chapter of the American Planning Association (APA Texas) held its annual conference in Fort Worth on October 3-6, 2012. BikeTexas was an Annual Sponsor of this year’s event, with an in-kind donation of bicycles for the mobile workshop “Fort Worth Bike and Pedestrian Planning.”

The workshop was led by Julia McCleeary, AICP, City of Fort Worth and Jeff Whitacre, AICP, Kimley-Horn and Associates. The route was a rigorous 12 miles, with a few good hills, but even though there were some inexperienced cyclists and one flat tire, everyone stayed with the group. Attendees were able to tour recently implemented projects including bike lanes, buffered bike lanes, shared routes, and trails. BikeTexas’ recently acquired Trek Virve 2 hybrid bikes helped attendees have a smooth experience, and the discussions led by Ms. McCleeary and Mr. Whitacre helped keep everyone engaged.

As part of our sponsorship, BikeTexas was allotted a great space in the exhibition hall. We used the opportunity to show a running slide show of some top-notch bicycle infrastructure from around Texas and all over the world, including cycle tracks. We also were able to have great conversations with planners and elected officials from around the state who are interested in making their areas more bike-friendly — everyone from the City of Tyler’s Mayor and MPO Chair, to the Executive Director of El Paso’s Downtown Management District. We also engaged with several folks from some of Texas’ smaller towns, and helped generate a lot of interest in Safe Passing, Complete Streets, and bicycling infrastructure. 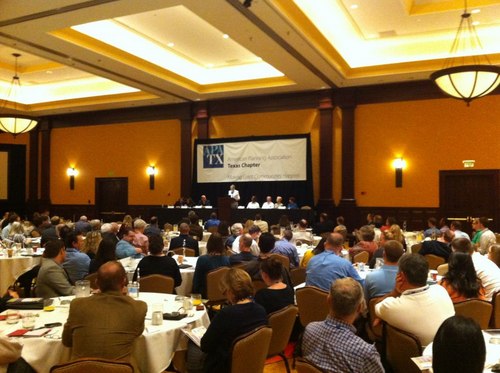 It was a real treat for BikeTexas was getting to see just how biking and walking are important to the Texas planning community. In one session, Dallas’ DART systems presented alongside Dallas Bike Coordinator Jared White to discuss how DART was utilizing Federal Transit Authority funds to improve walking within one-half mile and biking within three miles of each of its key transit stations. In addition, several awards recognized great achievements in planning for efforts to increase bicycling and walking, including San Antonio’s Bike Master Plan, Collin County’s Regional Trails Plan, and an individual award to Team Better Block’s Jason Roberts, who, along with Andrew Howard, received the BikeTexas Advocate of the Year award at the 2012 Texas Trails and Active Transportation Conference.

BikeTexas was very proud to be part of such a great conference, and we look forward to attending and sponsoring next year!

MISSION BikeTexas advances bicycle access, safety, and education. We encourage and promote bicycling, increased safety, and improved conditions. We unite and inspire people and provide a cohesive voice for people who ride bikes in … END_OF_DOCUMENT_TOKEN_TO_BE_REPLACED