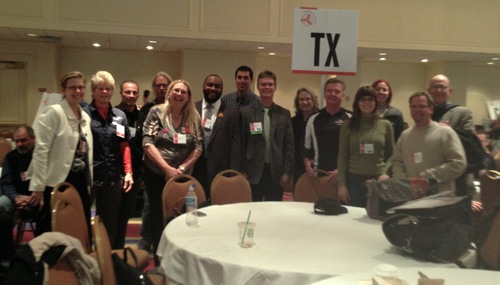 Eighteen Texans, including four BikeTexas staff, were in Washington, D.C. this week for the National Bike Summit. Texas sends a strong delegation every year, and 2013 was no exception! This year’s theme was “Bicycling Means Business,” and many speakers addressed the ways in which cycling benefits businesses and local economies across the nation.

In addition to our delegates being in D.C., Texas bike leaders also spoke at the conference: Jason Roberts of Dallas-based Team Better Block and the City of Austin’s Director of Public Works Howard Lazarus both addressed the national audience during breakout sessions at the conference on Tuesday. Mr. Lazarus’ talk about how separated bike lanes are attracting new businesses was particularly rousing for those in attendance.

Wednesday was the official Bike Lobby Day at the nation’s capitol. Our delegation broke into five teams to visit 35 congressional offices and talk to Texas Senators and Representatives about the importance of bicycles to the economy and health of our state.

Of course, Twitter was buzzing with coverage of the conference (and if you missed it, search hashtag #NBS13 to read all the tweets), and our delegates chipped in to share all the summit news. BikeTexas collected all the tweets written for or about Texans during the conference: you can read and check the photos. Monday’s tweets are here, Tuesday’s are here, and Wednesday’s are here.

Does this sound like something you’d love to be a part of? Start planning now to be in the Texas Delegation in 2014!

You can experience the Texas version of this event in Austin on March 25. We’re expecting over 70 people from around the state to converge on the state capitol for Cyclists in Suits – Texas’ Bike Lobby Day. Register now at BikeTexas.org/suits.

MISSION BikeTexas advances bicycle access, safety, and education. We encourage and promote bicycling, increased safety, and improved conditions. We unite and inspire people and provide a cohesive voice for people who ride bikes in … END_OF_DOCUMENT_TOKEN_TO_BE_REPLACED