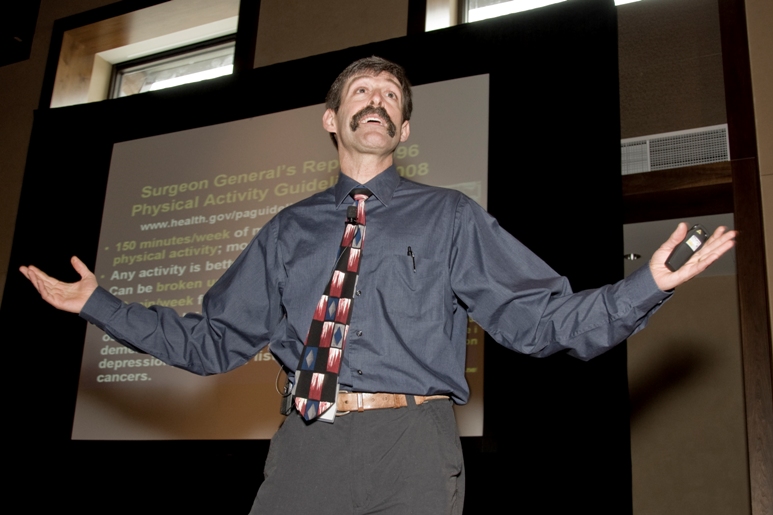 The highlight of the Texas Trails and Active Transportation Conference, for me, was Mark Fenton, an Olympian Speed Walker and alternative transportation advocate who captivated the entire conference over his enthusiastically-delivered Thursday lunch plenary titled “Lessons Learned on a Very Long Walk.”

By framing the process of successful community organizing into an anecdote of a Pacific Crest speed-hike adventure he recently undertook, Fenton’s presentation combined striking visual images, comedy, and audience participation into an exciting inspirational talk. It was easy to see how Fenton could coordinate disparate groups into a position of alignment by using his enthusiasm for the outdoors.


Following the luncheon, I chose to attend Fenton’s mobile discussion, “Community Engagement for Healthy Community Designs.” The discussion began with another PowerPoint presentation, this time a more specified exploration of neighborhood planning which compared mall-scapes, new urbanism and villages. He shared many entertaining terms of the field, my favorite of which was for people who are B.A.N.A.N.A.’s, meaning people of a mindset to Build Absolutely Nothing Anywhere Near Anything. He shared the difficulties of negotiating for pedestrian and bicycle access without discouragement, and by adding humor to complaint, he kept the focus of the projects he has undertaken on the projects, rather than the obstacles.

He recommended keeping the discussion open-minded in order to avoid attitudes of blame which bogs down personal responsibility, and to support honesty from the participants, because ultimately everyone is going to benefit by having trail routes in their area. Though this discussion had a lot of information in it, it was kept brief in order to fit in time for a walking tour.

Clad in raincoats, the group clambered out into the drizzle to investigate the Austin streets for examples of successful and unsuccessful pedestrian and bicycle planning. Less than one block from the Conference Center, Fenton paused at a city bike rack and asked the group why no one had parked their bike there, despite so many cyclists in the area for the conference. Individuals pointed out its location flaws – too close to parked cars on one side of the rack, in the path of pedestrians on the other. Additionally, the rack was positioned too far from the entrance of the closest business, a restaurant, to be an obvious parking spot and offer the security of direct eyesight for the customers. This was a new way to explore familiar territory, and the group became animated with the excitement of a new town to explore.

As the walk progressed Fenton pointed out a “goat path,” a place where pedestrians had created a trail through the grass for lack of charted territory, and we all noticed the cracks, broken curbs, unpredictable driveways of a gas station, and long wait for a crosswalk light with the fascination of foreigners in a new world. Every 2 blocks Fenton would stop and ask us to rate our route, one-to-ten, and then comment on what we’d liked and what we hadn’t. These pop-quizzes kept our awareness focused and allowed everyone to catch up, which was essential because he was an enormously fast walker and I was literally trotting to keep up!

We watched in anticipation for jay-walkers at a busy intersection, noticing an almost continuous stream of pedestrians relying on the turn lane as a pedestrian refuge to cross the street mid-block rather than long waits at the corner. We experienced the benefits in walking a tree lined street, and observed sidewalks which transitioned abruptly into stairs or whose ramps were too steep for practical use.

Fenton had the group line our bodies together shoulder to shoulder out into an intersection to demonstrate the shape of a curb bulb-out, a street design that forces car to slow down dramatically and gives pedestrians increased visibility with decreased time spent in the path of vehicular traffic. Fenton suggested using a similar strategy for streets one is proposing “reconfigurative” changes. Place well-marked hay bales in the street and observe the effect they have on traffic. His strategy also includes going door-to-door to discuss the project he is undertaking in order to open lines of communication early and to get an idea of the concerns of the immediate community for whom he is serving.

It was clear to see why Mark Fenton had achieved the success he has in his field and an honor to get to learn first hand how he does it. He allowed that his knowledge was incomplete and encouraged our group to speak up at every opportunity, right through the end of the walk, which concluded with a question from him that we each answered in turn. A question worth considering, I’ll now ask you: “What are you going to do to improve bicycle and pedestrian access this week?” For more on Fenton, click here.

MISSION BikeTexas advances bicycle access, safety, and education. We encourage and promote bicycling, increased safety, and improved conditions. We unite and inspire people and provide a cohesive voice for people who ride bikes in … END_OF_DOCUMENT_TOKEN_TO_BE_REPLACED