You are here: Home / BikeTexas BikeNews / BikeNews; Advocacy / Some great praise for Advocacy efforts in Houston and Denton, from our National Partners Rails to Trails Conservancy 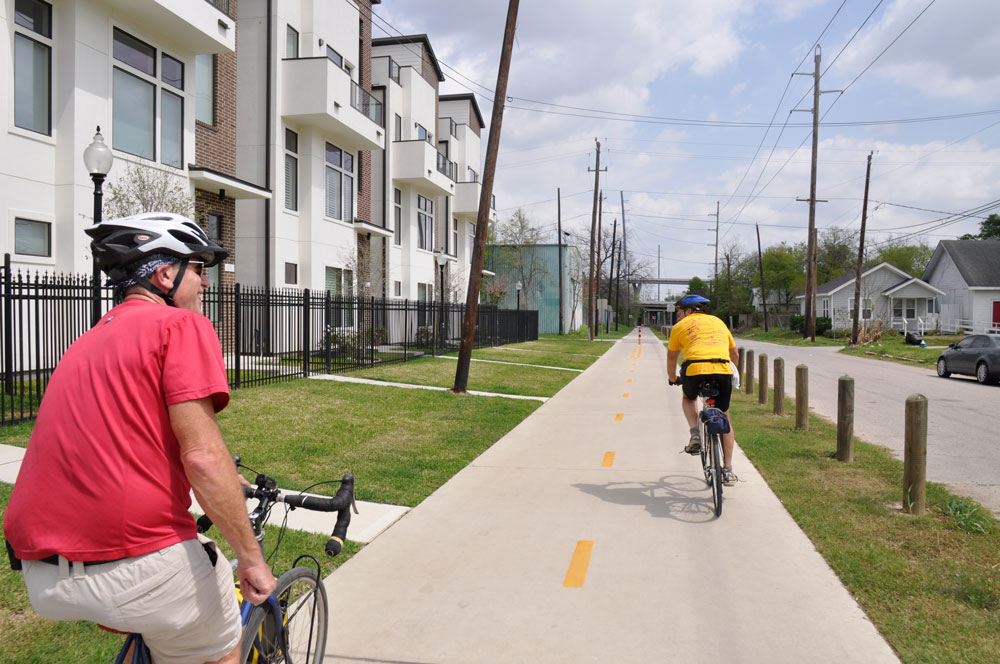 Congraulations to Houston and Denton for the national recognition they have received from the Rails-To-Trails Conservancy! Here’s the article, taken from Rails-To-Trails.org:

Houston and Denton have turned around their approach to transportation in recent years. Through well-organized collective efforts, both cities have made huge strides with Houston’s Colombia Tap Rail-Trail and Denton’s Branch Rail-Trail. Since the success and widespread use of these trails, city leaders are finally taking note and beginning to seeing the significance of infrastructure enhancements as a more affordable and effective approach to connectivity and Complete Streets.

Houston’s Columbia Tap Rail-Trail was the Conservancy’s January 2012 Trail of the Month. A combination of advocacy effort, enlightened leadership and government investment is starting to change how multi-modal transportation is addressed. In 2010 an article in the Houston Chronicle noted that the city was beginning to recognize that walking and biking are legitimate forms of transportation.

The Columbia Tap Rail-Trail, a 4 mile path not only serves as a safe transportation venue for residents in Houston’s Third Ward, but it is a vital link to other trails and bike lanes in the city.

“It’s a really great thing,” says Veon McReynolds, head of the local nonprofit cycling group Tour de Hood, who lives just a few blocks from the trail. “Right here in the neighborhood, you see a lot of people using it for walking and cycling.”

The roots of the Columbia Tap go back more than 150 years, when Houston was a small but growing center of commerce in the newly minted Lone Star state. The underlying rail line—known back then as the Houston Tap and Brazoria Railway—opened in 1856 and served as an important route for moving crops and people into the heart of the city from plantations and ports to the south. It eventually became part of Union Pacific Railroad’s network before falling into disuse.

With federal and local funding, a four-mile section of the corridor from Dixie Drive to Dowling Street was later converted into a rail-trail and opened to the public in March 2009. Today, the 10-foot-wide concrete trail cuts a scenic line through Houston’s Third Ward, the historic heart of the city’s African-American community. Along the way, it passes through neighborhoods of small homes and apartment buildings, dotted with churches, schools and playgrounds.

The trail offers residents and visitors improved mobility and connectivity to major employment centers; community centers; churches; art studios in the warehouse district; schools such as Debakey High School; and universities such as Texas Southern University and University of Houston; recreational facilities like Hermann Park, the beautiful 445 acre green spance and McGregor Park; the Houston Zoo; the Museum District; as well as the Texas Medical Center and Minute Maid Park. The park and its surrounding neighborhood provide a wealth of educational diversions, including Rice University, the Houston Zoo, the Houston Museum of Natural Science, the Children’s Museum of Houston and the fascinating Buffalo Soldier National Museum and Heritage Center.

The multi-use Brays Bayou Trail (which follows one of several west-to-east flowing waterways that give Houston its nickname of the Bayou City) skirts the southern edge of Hermann Park and also connects with the Columbia Tap. Less than a mile north of this trail access, the Columbia Tap slices through a 150-acre expanse on the campus of Texas Southern University (TSU), one of the country’s largest historically black colleges and home of a nationally ranked football team, the Tigers.
The Columbia Tap Trail is just one more step in connectivity within Houston communities making them more vibrant and appealing, enhancing health and quality of life for its users.

MISSION BikeTexas advances bicycle access, safety, and education. We encourage and promote bicycling, increased safety, and improved conditions. We unite and inspire people and provide a cohesive voice for people who ride bikes in … END_OF_DOCUMENT_TOKEN_TO_BE_REPLACED