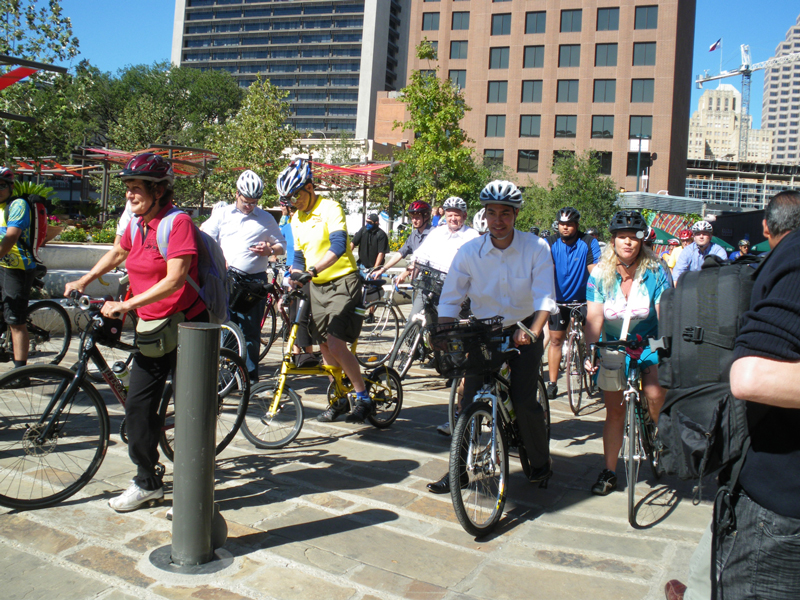 On November, 2, 2009, San Antonio cyclists got a chance to hang out with San Antonio Mayor Julián Castro and ride the Missions Trail, after the morning San Antonio Bikes Summit at City Hall.

Bill and Preston then outlined LAB’s Bicycle Friendly Program and led the participants, most from City departments with an interest in cycling and physical activity, in exercises to develop an action plan to help San Antonio achieve BFC status. To do that, participants tried to determine immediate and long term opportunities, issue identification and ranking of priorities for bicycle policies and infrastructure. Alamo Area MPO Bike Coordinator Lydia Kelly and BikeTexas staff attended and assisted Bill and Preston in the process.

While the meeting was certainly enjoyable and productive, the next activity was even better – a bike ride!

After lunch, Mayor Castro led a group of over 40 cyclists south from downtown’s Main Plaza, onto the Missions Trail. One group stopped and turned around at Mission Concepción, while those of us lucky enough to have the time to do so rode all the way to Mission Espada (just outside Loop 410 South) and back to downtown. (Click here for the BikeTexas article on our previous Missions Trail bike ride.)

In addition to trying for BFC status, the San Antonio City Council is exploring a local Safe Passing ordinance to protect San Antonio’s vulnerable road users, using the language of the Safe Passing Bill (SB 488) that was so thoroughly vetted by the 81st Texas Legislature.

BikeTexas urges San Antonians and other Texas cyclists to sign the Safe Passing petition, and to contact BikeTexas if you would like to enact a Safe Passing Ordinance in your community.

MISSION BikeTexas advances bicycle access, safety, and education. We encourage and promote bicycling, increased safety, and improved conditions. We unite and inspire people and provide a cohesive voice for people who ride bikes in … END_OF_DOCUMENT_TOKEN_TO_BE_REPLACED