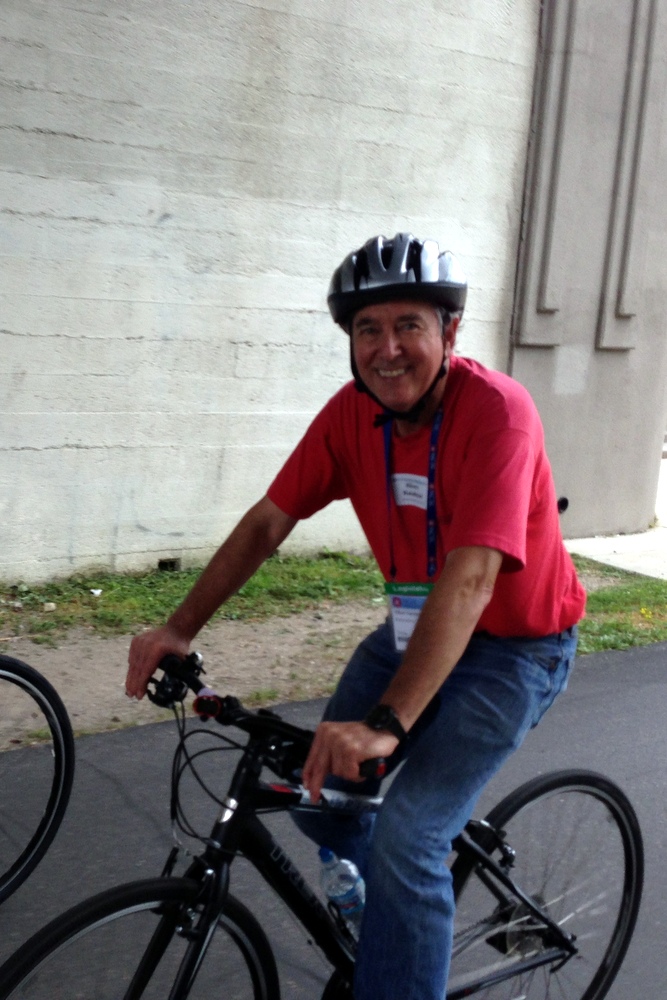 Rep. Naishtat had a spill on his bike after bumping a railing on a bicycle bridge while drinking water from his bottle. He got right back on his bike and finished the route with no apparent problem. He did not get any road rash and did not require assistance from the EMT that was on the ride. There was no automobile or other bicyclist involved in the accident.

A delayed reaction to the spill a few hours later showed swelling to his leg. BikeTexas Executive Director Robin Stallings said, “Rep. Naishtat noticed bruising and swelling on his leg a few hours after the bike ride. Minnesota legislative colleagues urged him to get immediate treatment. A medical tech at the Minneapolis Convention Center confirmed a trip to the hospital was in order and called an ambulance.”

Stallings spent a few hours with Rep. Naishtat on Friday and Saturday until he was moved from ICU to a regular hospital room. Elliott remained very alert and engaged with the doctors and nurses the entire time Stallings was there.

Hennepin County Medical Center RN Sheryl Karvonen told Rep. Naishtat and Stallings, “It is fortunate that Rep. Naishtat rides a bike and walks regularly. His good physical condition will speed up his recovery.”

According to Stallings, Rep. Naishtat is up and walking and doctors have said that he is likely to be released Sunday afternoon or Monday. He will need to keep his leg elevated as much as possible until the swelling goes away. Rep. Naishtat says he may stay with friends in Minneapolis for a couple of days before returning home.

BikeTexas is the lead organizer and producer of the NCSL Bipartisan Bike Ride that takes place at the NCSL Annual Legislative Summit in a different U.S. city each year. The 10.4-mile route for 2014 was primarily on multi-use trails. On the street portion of the route, police provided traffic control so that participants were not exposed to automobile traffic during the event.

BikeTexas provides the bicycles and helmets for the 150 ride participants, who are mostly State Senators, State Representatives and legislative staffers from all over North America. The tenth annual NCSL Bipartisan Bike Ride in Minneapolis included escorts of four police officers on bicycles and about 15 expert-level bicyclists from this year’s local co-producer, BikeMN, as ride marshals and safety monitors. An EMT followed up the rear of the slow paced ride on an electric bicycle with an EMT kit in a bike trailer, with additional ambulance support available within 4 minutes. Hosts of the ride this year included Texas Senator Rodney Ellis (D-Houston) and Texas Representative Linda Harper Brown (R-Irving), as well as President of the Minnesota Senate Sandy Pappas (DFL-St. Paul), Minnesota Senator Scott Dibble (DFL-Minneapolis), Minnesota Senator Julie Rosen (R-Vernon Center), and Minnesota Senator David Senjem (R-Rochester).

MISSION BikeTexas advances bicycle access, safety, and education. We encourage and promote bicycling, increased safety, and improved conditions. We unite and inspire people and provide a cohesive voice for people who ride bikes in … END_OF_DOCUMENT_TOKEN_TO_BE_REPLACED