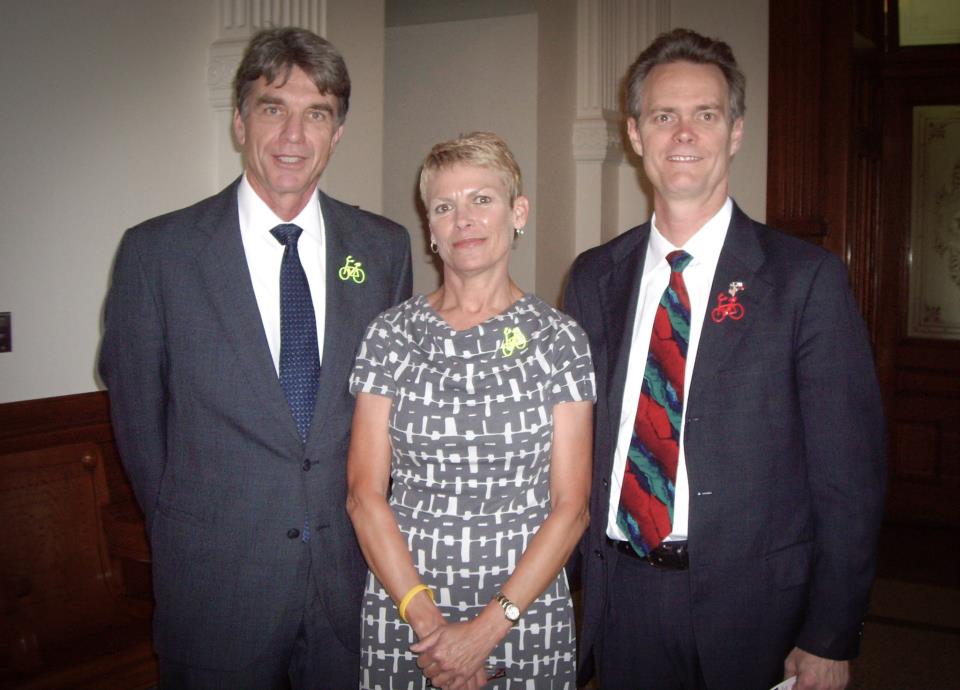 On April 15, 2009 I was fortunate to spend the day at the state Capitol lobbying for SB 488 and HB 827, better known to those of us in the cycling community as the Safe Passing Bill. My guides for the day were Robin Stallings and Mark Stine of BikeTexas. These gentlemen work tirelessly to promote safe cycling in Texas, and we as cyclists owe them a huge debt of gratitude for all they do to make our rides a little safer!

On this particular day our mission was to hand deliver a resolution adopted by the Palo Pinto County Commissioners Court urging Senator Craig Estes (R-Wichita Falls) to support SB 488. The senator was on the list of unconfirmed and I was naive enough to believe that a resolution from a Commissioners Court in his district was enough to convince Senator Estes to gleefully join our cause!

I learned a lot that day about politics, the passage of bills and our elected officials in Austin. Senator Estes declined to co-author the bill and expressed technical concerns with the bill language, which was surprising to me since he hails from Wichita Falls, home of the Hotter’N Hell 100, one of the largest organized rides in the United States. The highway overpasses in Wichita Falls even have bike riders on the walls. I did appreciate the time Senator Estes spent with us explaining his views on SB 488.

There were so many highs and lows that day, and meeting Senator Rodney Ellis of Houston (one of the bill’s authors) was definitely a high point! Senator Ellis is an avid cyclist who hauls his Bike Friday with him on business trips so that he can ride – my kind of guy! This senator is working very hard to make Texas a safer and more cyclist friendly state. It is great to know we have someone in Austin who truly understands the needs of cyclists. I would ride his wheel anytime!

Another high was meeting Representative Jim Keffer (R-Eastland). Representative Keffer sat down with us to discuss HB 827/SB 488 and assured us of his support at the conclusion of our meeting.

I pride myself on being a fit cyclist and runner, but after spending one day traveling the halls of our great state Capitol visiting the offices of senators and representatives, I was more exhausted than after completing my first century!

My hat is off to the staff of BikeTexas who do this daily when the legislature is in session, and I hope they have the opportunity to catch up on some of the rides they have missed while promoting safe cycling in Texas.

MISSION BikeTexas advances bicycle access, safety, and education. We encourage and promote bicycling, increased safety, and improved conditions. We unite and inspire people and provide a cohesive voice for people who ride bikes in … END_OF_DOCUMENT_TOKEN_TO_BE_REPLACED