You are here: Home / BikeTexas BikeNews / BikeNews; Advocacy / On the Lege: Texting While Driving Ban 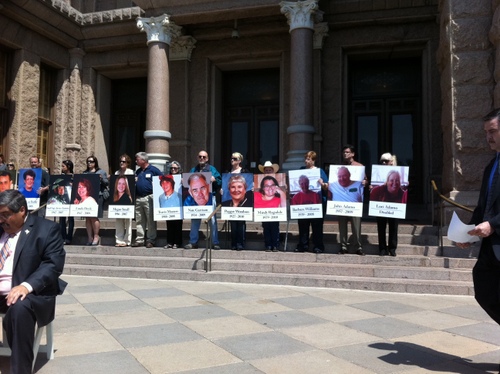 Motorists who text while driving pose a high risk to bicyclists, pedestrians, and all other road users in addition to themselves. The degree of this risk has become apparent through a series of fatal crashes in Texas. BikeTexas strongly supports a ban on texting while driving as an important part of a strong traffic safety culture in Texas.

In 2011, a bill banning texting while driving (HB 242) was passed by both the House and the Senate but was subsequently vetoed by Governor Rick Perry.

Previous bill author Representative Tom Craddick has re-filed this bill as HB 63 in the 2013 session to ban texting while driving.

A CNBC report on a Car and Driver magazine test of texting while driving found it to be just as dangerous as drinking and driving. The National Highway Traffic Safety Administration has a website dedicated to facts about distracted driving, in an attempt to educate the public on the dangers and decrease the fatalities associated with distracted driving. Thirty-nine states ban texting while driving; BikeTexas and many others want Texas to be the next state to join that list.

MISSION BikeTexas advances bicycle access, safety, and education. We encourage and promote bicycling, increased safety, and improved conditions. We unite and inspire people and provide a cohesive voice for people who ride bikes in … END_OF_DOCUMENT_TOKEN_TO_BE_REPLACED