You are here: Home / BikeTexas BikeNews / BikeNews; Advocacy / On the Lege: Safe Passing 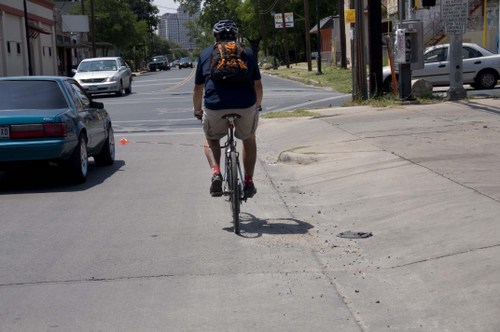 The Safe Passing Bill will require at least three feet passing distance (six feet by commercial vehicle) when a motorist passes a vulnerable road user. It also addresses the “right hook” (turning dangerously in front of a vulnerable road user) and failing to yield when making a left turn at an intersection. A violation of this law would be punishable as a misdemeanor.

In 2009, the bill passed both houses but was vetoed after the end of the 2009 Legislative session by the Governor. BikeTexas staff believed the timing was not right for re-filing in 2011, but sees a more favorable environment for re-filing the bill in 2013.

BikeTexas is currently working with legislators to identify supporters and sponsors. This bill has not yet been filed in the 2013 Session.

BikeTexas is currently working with legislators who supported the bill in 2009. This bill has not yet been filed in the 2013 Session.

MISSION BikeTexas advances bicycle access, safety, and education. We encourage and promote bicycling, increased safety, and improved conditions. We unite and inspire people and provide a cohesive voice for people who ride bikes in … END_OF_DOCUMENT_TOKEN_TO_BE_REPLACED