You are here: Home / BikeTexas BikeNews / BikeNews; Advocacy / On the Lege: April Activities 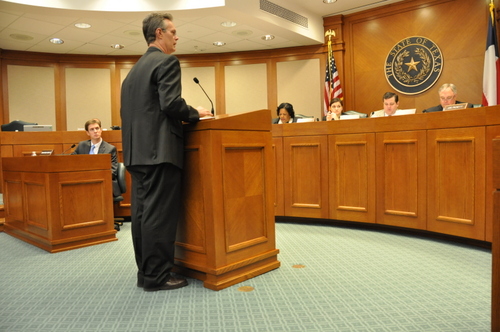 The Texas Legislature is now entering crunch time: Saturday and Sunday floor sessions are being held as the end of the session (May 27) approaches.

HB 2225 (Safe Passing) has passed out of the House Transportation Committee on a 7-2 vote with two absent. It is now in the House Calendars Committee, where an affirmative vote is need to get it out onto the floor. Safe Passing was passed by both houses in 2009 but was vetoed by the Governor. It was not introduced in the 2011 legislative session.

Neither of the companion bills, SB 1515 (Safe Passing) nor SB 565 (Complete Streets), have received a hearing in the Senate Transportation Committee. Time is running out for both bills to proceed as stand-alone bills. Bills sometimes are attached as an amendment to other pertinent bills. BikeTexas staff continues to meet with legislative staff and is reviewing these opportunities.

HB 307, requiring cyclists to have red lights on the rear during nighttime, also remains in the House Calendar Committee. It has been placed on a list not to be brought up for a committee vote “at this time” and will most likely remain there.

HB 200, addressing risk and liabilities of utilities allowing trails to be built in their right-of-way in Harris County (Houston), has passed both the House and the Senate. Depending on the success of trails as a result of this bill, future bills covering other parts of the state may be introduced in future sessions. Building trails on the utility right-of-way will provide connections to the trail system being built on the Harris County bayous and allow greater connectivity for all trail users, including cyclists. This bill is now on the Governor’s desk.

Two other bills supported by BikeTexas that address traffic safety have moved further in the session.

HB 63, banning texting while driving, passed through the House. It been referred to the Senate Transportation Committee, where it received a hearing. A vote is still pending in the committee. This bill passed both houses but was vetoed by the Governor in 2011.

SB 510 extends the “move-over” requirements, currently in place for public safety vehicles and tow trucks, to TxDOT service vehicles. This bill requires either a lane change or reduction of speed when encountering these vehicles on the roadside with emergency lights flashing. SB 510 passed through both houses and was signed by the Governor into law on May 2. It goes into effect on September 1, 2013.

MISSION BikeTexas advances bicycle access, safety, and education. We encourage and promote bicycling, increased safety, and improved conditions. We unite and inspire people and provide a cohesive voice for people who ride bikes in … END_OF_DOCUMENT_TOKEN_TO_BE_REPLACED