You are here: Home / BikeTexas BikeNews / BikeNews; Advocacy / Hundreds Turn Out for Unanimous Adoption of Fort Worth Bicycle Master Plan

Fort Worth’s Lockheed Martin Recreation Association Bicycle Club (LMRABC) teamed with Colonel’s Bicycles, Bicycles, Inc., and the Fort Worth Bicycling Association (FWBA) to show highly visible support for the BIKE Fort Worth Plan at a public hearing on Feb 9, 2010. One-hundred twenty bright yellow t-shirts with an “I Support BIKE Fort Worth” design by LMRABC member Kyle Carr were purchased by the four organizations and handed out for free. The Fort Worth City Council chamber was filled to standing room only with cyclists in yellow or their respective cycling jerseys. There were over 200 in attendance in support of the plan, with 42 members of the community commuting to the meeting by bicycle. 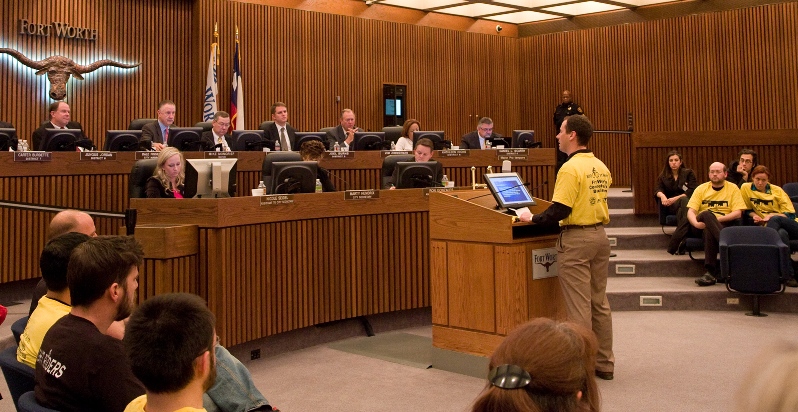 BIKE Fort Worth is the city’s comprehensive plan to establish bicycling as a safe and attractive alternative mode of transportation. The plan was developed by the city staff with active participation from members of the LMRABC. The three goals of the plan are to 1) triple the number of bicycle commuters, 2) decrease bicyclist-related crashes by 10%, and 3) achieve official designation of the city by the League of American Bicyclists as a Bicycle Friendly Community.

Austin (Silver) and College Station (Bronze) are the only Texas cities that have attained recognition as “Bicycle Friendly Communities”. The major action to achieve the goals of the plan is to increase the size of the existing bikeway network (off-street, on-street bike lanes, and on-street signed bike routes). The Fort Worth bikeway network is presently just over 100 miles. The plan recommends the bikeway network be increased to over 760 miles within the city. Additional bikeway miles are also planned for Fort Worth’s extraterritorial jurisdiction (ETJ). Other actions include implementing the following program and policy recommendations:

There is no specific funding source identified to implement the bikeway network; however, it is envisioned that federal, regional, local, and private funding sources will be found to implement the plan on an incremental basis. According to the Star-Telegram, the city has already received a $400,000 U.S. Department of Energy grant to develop on-street bicycle routes and lanes and bicycle parking in the Central Business District.

The BIKE Fort Worth Plan was presented to the City Council by Julia McCreary of the City Planning & Development Department. As mentioned in the Star-Telegram on Feb 11th, citizens who spoke in favor of the plan included the presidents of “two big cycling clubs” in Fort Worth – John Roberts of the FWBA and Jim Wilson of the LMRA Bicycling Club. Council members Joel Burns, District 9, Carter Burdette, District 7, and Mayor Mike Moncrief also spoke in favor of the plan. No citizens spoke against the plan. Well-deserved recognition was given to former city employee Don Koski, the chief architect of the plan. The council was unanimous in its approval of the BIKE Fort Worth Plan and of its incorporation into the Fort Worth City Comprehensive Plan. For more information about the BIKE Fort Worth Plan, click here.

Above: Jim Wilson speaks to the Fort Worth City Council

MISSION BikeTexas advances bicycle access, safety, and education. We encourage and promote bicycling, increased safety, and improved conditions. We unite and inspire people and provide a cohesive voice for people who ride bikes in … END_OF_DOCUMENT_TOKEN_TO_BE_REPLACED