You are here: Home / BikeTexas BikeNews / BikeNews; Advocacy / Citizen Lobbying: A Constituent Meets With Her Congressman 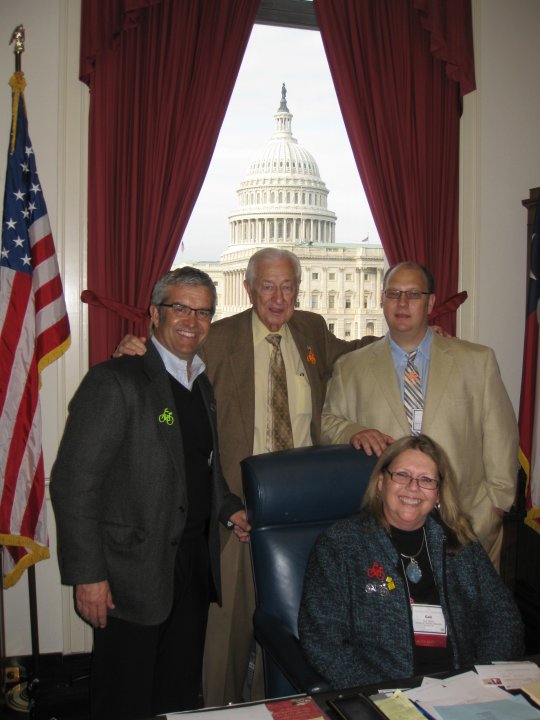 During the National Bike Summit we spent one of our days walking the halls of the Senate and Congress as we visit our elected officials from Texas. I led one of three groups of four other Texans as we walked from office to office, meeting mostly with staffers of the Senators and Representatives.

As a constituent of Congressman Ralph Hall, I was looking forward to visiting with him in person. But when it was time for our appointment with him, I was sad to see he was on the House floor, voting, and could not make the meeting. We spent a nice few minutes visiting with his wonderful staff and asking for the Congressman’s support of various bicycling-related bills. As we left I gave my card to a young lady in the office and told her to let Rep. Hall know that I was sorry we didn’t get to visit.

We went on our way, continuing our schedule of office visits in another building, when I got a phone call.

The staffer let me know that the Congressman was back and very much wanted to meet with me – he was hoping I could come back! As we only had one appointment left that day, I split off from the group with Jimmy Britton and Chris Holmes, heading for a promised wonderful time.

As we entered the Congressman’s office he happily greeted us and made us feel most welcome. He made sure that I sat in his huge chair, behind his equally huge desk, and had one of his staff take our photo. The congressman stood behind me, the other two were on either side. Now this is impressive as the view of the Capitol Dome is right outside his office window and makes for a superb backdrop!

Congressman Hall spent the better part of an hour entertaining us with stories of LBJ, George W. Bush as a 15 year old youngster, stories of WW II, his theories on politics today and many other subjects, jokes and fun stuff. We were greatly entertained, honored to hear about life on the Hill over the 15 terms the Congressman has served. I loved the stories about women who supported their husbands through the whole political process (often keeping them on the right path). As we left, the Congressman reached into a drawer and gave us all a wrapped coin inserted as a keepsake of our visit. I have mine from last year and will add this to my collection.

Congressman Hall’s southern hospitality is truly charming, and his gracious invitation to come back again was sincere. As we were leaving, the Congressman took my hand and asked if I were married. I said ‘Yes” and he asked “Happily?” “Very!” I replied, and he had a twinkle in his eye as he talked of his dear wife who passed a few years ago. Here’s a man who values what a woman can bring into a marriage. I like that.

MISSION BikeTexas advances bicycle access, safety, and education. We encourage and promote bicycling, increased safety, and improved conditions. We unite and inspire people and provide a cohesive voice for people who ride bikes in … END_OF_DOCUMENT_TOKEN_TO_BE_REPLACED