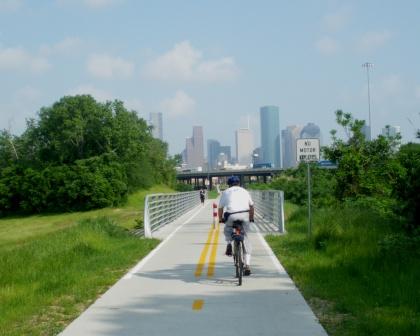 Over $50 million for bicycle and pedestrian facilities and education funding was awarded by the Texas Transportation Commission (TTC) to cities all over Texas on July 29th! The bike/ped portion represented 42 of 54 projects awarded Federal Transportation Enhancement Program funds.

Enhancements or TE funds have been the major source of bicycle facility funding in Texas since their creation in the federal transportation bill (ISTEA) in 1991. BikeTexas played a major role at the federal level in saving the program from cuts in the 2005 transportation reauthorization (SAFETEA-Lu). Our spokesperson at the time, Linda Armstrong Kelly, appeared on TV news stations across the country and joined staff in meeting with members of Congress to discuss the importance of the program.

In spite of the huge popular support, Enhancements were cut (over $300 million) in 2006 by the TTC, then led by former Chair Ric Williamson, appointed by Governor Rick Perry. BikeTexas led a statewide fight to save Enhancements. In addition to cyclists and Texas bicycle industry leaders, allies included rural economic development organizations and historic interest groups.

Ultimately, BikeTexas achieved a major victory. The TTC agreed to save approximately $75 million of $320 million for future Enhancement awards. On July 29, 2010 that is about the amount of funds that were awarded to some excellent trail, sidewalk and education projects in all parts of Texas. Go to www.BikeTexas.org/enhancements to see if your city was awarded a grant or if you want to see archived details of the BikeTexas fight to save Enhancements.

BikeTexas also initiated a successful effort in 2007 at the federal level to prevent a repeat of the loss of federal TE bicycle facility funding. We were able to work with Members of Congress and our friends at the Rails to Trails Conservancy to insert a “Proportionality” provision into the federal energy bill. All future cuts (in response to federal rescissions) must now be proportionate across all programs. If the Proportionality provision had been in effect in 2006 Texas would have lost only $3-$9 million in bicycle facility funding instead of $225 million.

MISSION BikeTexas advances bicycle access, safety, and education. We encourage and promote bicycling, increased safety, and improved conditions. We unite and inspire people and provide a cohesive voice for people who ride bikes in … END_OF_DOCUMENT_TOKEN_TO_BE_REPLACED