You are here: Home / BikeTexas BikeNews / BikeNews; Advocacy / BikeTexas Helps Save Bike. Ped and Trail Funds from Rescission in 2011 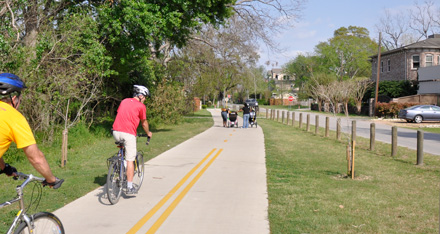 Not words that Texas bike, ped and trail advocates usually like to hear – but it was sweet music to the ears as Rails-to-Trails Conservancy published a table of the 2011 Federal Highway Administration (FHWA) transportation rescission impact on Transportation Enhancements (TE) and Recreational Trails Programs (RTP) in the fifty states plus the District of Columbia. TE is the top federal source of funds for paved, multi-use trails and RTP is the main source of funds for unpaved trails for mountain biking.

In the past, Texas ranked third at 40% for the highest percentage of state TE funds sent back to the Feds to meet rescissions “requests.” But 2011 is different: Texas joined six other states for zero percent of both TE and RTP funds returned, leaving both programs fully funded in our state!

FHWA was seeking a total of $2.5 billion in rescissions from the states in 2011. Over $200 million of this would come from Texas.

After expressing concern to TxDOT about severe cuts to TE and RTP programs in the past, TxDOT invited BikeTexas to sit on the TxDOT Stakeholder Committee on Rescissions.

BikeTexas Executive Director Robin Stallings commented on the May 2011 meeting of the committee, “The MPO heads and others on the committee strongly supported our position that keeping these TE and RTP funds in place provides the means to implement all of the plans across the state toward a balanced transportation system.”

Stallings reported that by the end of the meeting, the stakeholder committee and TxDOT had decided to keep all $85 million TE and $3.1 million RTP funds. “We especially stressed that the $3 million for trails, loose change for highway projects, affected trail projects in over 40 Texas communities – a program impact far beyond its funding level that needs to continue.”

Rails-to-Trails Conservancy Vice President Kevin Mills conveyed the national rescission news to BikeTexas and others in an August 30, 2011 letter. See the Rails to Trails letter and analysis of rescission impact on states for 2011.

Overall nationally, the percentage of TE funds used to balance the 2011 rescission requests decreased to 11% from 21% in previous years. That sounds like an improvement, but TE is only 2.3% of FHWA funds sent to the states. The damage in raw numbers is $270 million from TE funds and $11 million from RTP funds nationally in 2011.

Still pretty tough news nationally, and BikeTexas supporters know that a tougher-than-usual fight is already underway in the U.S. Congress to ensure that TE, RTP and Safe Routes to School funding continues in the next Federal Transportation bill.

But in Texas, better lines of communication between TxDOT and bike, ped and trail advocates are bringing some changes for the better.

MISSION BikeTexas advances bicycle access, safety, and education. We encourage and promote bicycling, increased safety, and improved conditions. We unite and inspire people and provide a cohesive voice for people who ride bikes in … END_OF_DOCUMENT_TOKEN_TO_BE_REPLACED