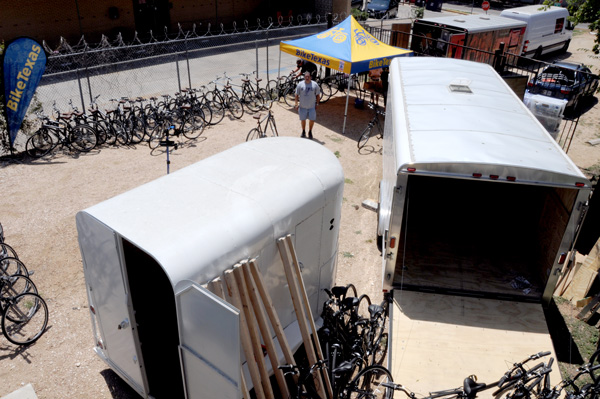 BikeTexas staff are on their way to Chicago this weekend for the Ninth Annual National Conference of State Legislatures (NCSL) Bipartisan Bike Ride. Every year the ride is hosted by Texas legislators in front of a national audience, and BikeTexas provides bikes and works with a local advocacy group to organize the ride. In 2011, over 150 state senators and representatives, their staff members, and their families participated in the ride in San Antonio. Organizers are planning for an even bigger turnout this year.

The NCSL Bipartisan Bike Ride is a great opportunity for legislators to relax and and see a bit of the host city before a full day of conference proceedings. For advocates, it’s a chance to build a relationship with legislators in a relaxed and enjoyable environment. Many Texas state legislators participate in the ride each year, and BikeTexas staff went to the capital two weeks ago to extend a personal invitation to each office to come out for the ride.

BikeTexas is very excited that Caron Whitaker with America Bikes will also join the ride in Chicago. With the recent federal transportation bill, MAP-21, states have much more say in whether or not to spend transportation dollars on walking and biking, and Ms. Whitaker will be on hand to explain MAP-21 to the Senators and Representatives from across the country.

BikeTexas is providing 150 bicycles and will be assisted by Chicago’s Active Transportation Alliance in leading the ride.

Many thanks to our ride sponsors BNSF, Walmart, General Mills, AT&T, and Primal Wear.

MISSION BikeTexas advances bicycle access, safety, and education. We encourage and promote bicycling, increased safety, and improved conditions. We unite and inspire people and provide a cohesive voice for people who ride bikes in … END_OF_DOCUMENT_TOKEN_TO_BE_REPLACED