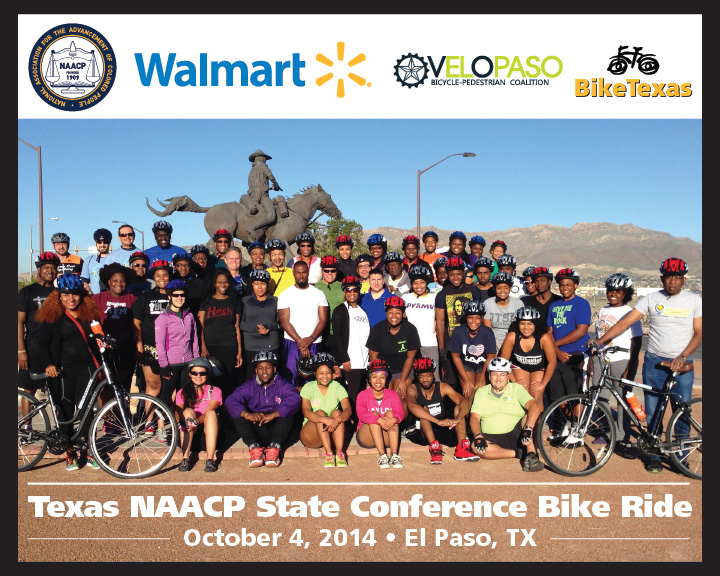 2014 marks the fifth year of a bike tour at the Annual Convention of the NAACP Texas State Conference. This year’s conference was in El Paso, so three BikeTexas staff plus 75 bicycles headed out on a Wednesday morning to get to El Paso in plenty of time for the Saturday ride.

The ride is sponsored by Texas NAACP and Walmart, and this year we had the added bonus of having VeloPaso staff and volunteers lending a hand. VeloPaso’s Victor Cordero and Scott White joined BikeTexas for a pre-ride to assess the best route for Saturday.

The day of the ride dawned, but we were up long before the sun as BikeTexas, VeloPaso, and Crazy Cat Cyclery were already hard at work getting bikes ready for ride participants. By 7 AM, 60 riders were checked in, equipped with bikes and helmets, and ready to go!

After our usual safety briefing, the group took off for a ride through El Paso and Ft Bliss, including part of the historic officers housing–some of these old homes are on the National Registry of Historic buildings, dating back as far as the late 1800s.

The route also took us by one of the small parks on base, which houses a replica of the old original Fort Bliss. There were several rooms in the Replica that were outfitted with furnishings from the early 1800s. There was a replica of the wood working shop, the leather shop, and the blacksmith shop. From there, we rode to the historic Parade Ground, and then off base and back to the hotel where the participants were treated to some great coffee and snack bars.

The ride went perfectly smoothly with no problems! All of the participants raved about the route and the great scenery. We’re already looking forward to returning for the sixth NAACP Texas State Conference bike ride in 2015!

MISSION BikeTexas advances bicycle access, safety, and education. We encourage and promote bicycling, increased safety, and improved conditions. We unite and inspire people and provide a cohesive voice for people who ride bikes in … END_OF_DOCUMENT_TOKEN_TO_BE_REPLACED