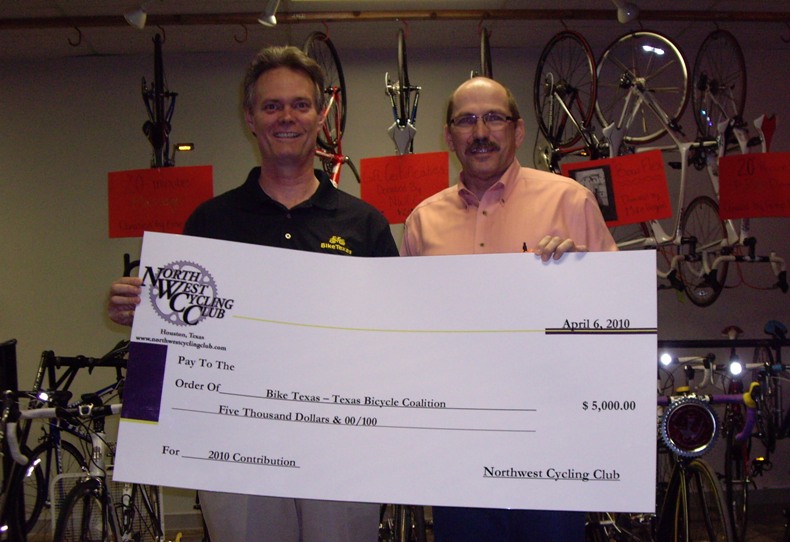 On April 6, 2010 BikeTexas Executive Director Robin Stallings headed to Houston to update the Northwest Cycling Club on BikeTexas’ activities for the past year. There was an impressive turnout of 40-50 people. The club members were very attentive during the recap of BikeTexas education activities. However they were especially interested in the Safe Passing bill progress last legislative session and the Safe Passing Ordinances that are beginning to pop up around the state. Several mentioned city council people and mayors that they know in different Texas cities and expressed a desire to help get an ordinance or two passed.

Robin was moved by the generous NWCC donation of $5,000 for 2010. “I am personally a member of BikeTexas and it pleases me to present this check on behalf of Northwest Cycling Club”, said David King, President of NWCC. “We were inspired to contribute by the example of Austin Cycling Association”. King also announced that club members voted to pledge a $5,000 contribution in 2011 and again in 2012.

All of us at BikeTexas extend our sincerest thanks to David King, President of the Northwest Cycling Club, and to all the club members. Clubs contributions enable us to do the work that we do, and multi-year commitments make planning out our next legislative session so much easier.

So thanks again to the Northwest Cycling Club!

MISSION BikeTexas advances bicycle access, safety, and education. We encourage and promote bicycling, increased safety, and improved conditions. We unite and inspire people and provide a cohesive voice for people who ride bikes in … END_OF_DOCUMENT_TOKEN_TO_BE_REPLACED