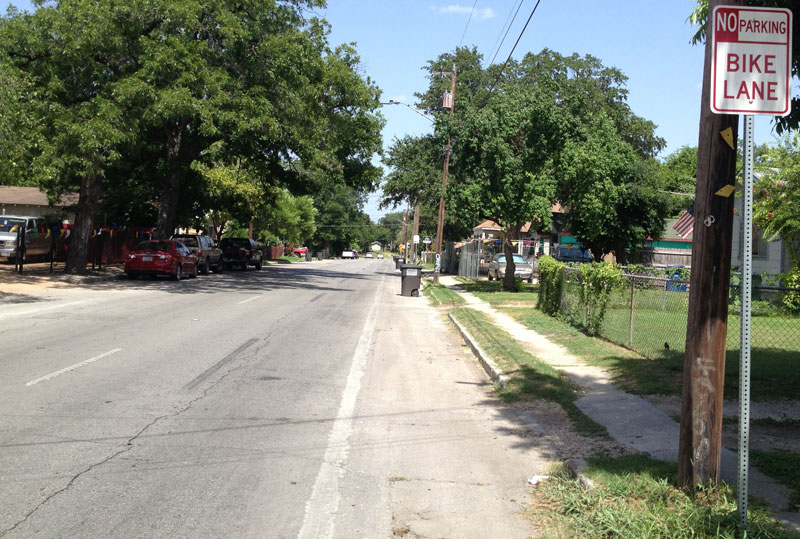 The City of San Antonio is spending $14 million to improve Theo and Malone between IH-35 and Zarzamora. Unfortunately part of that “improvement” is removing the bike lanes.

Sign the petition below to show your support for IMPROVING bike lanes, not REMOVING them.

The City’s Capital Improvements Management Services department held a public meeting in April 2013 and recommended that the bike lanes be removed.

At the public meeting, the citizens present asked for on-street parking and reduced truck traffic. No one presented to the community any of the positive benefits of improving the roads for all users, so attendees at the meeting did not get a complete picture of what bicycle accommodations can do for their street and their community.

Now, plans are moving forward to remove the bike lanes, even though the bond that San Antonians voted on to fund this project promised improvements to bicycle lanes, and these bicycle lanes were some of the first ever installed on San Antonio roads.

One of CIMS’ options included on-street parking and a wide cycle track to replace the bike lane – which would help buffer residents from loud truck traffic. This is the option that should be built with our tax dollars. You can download CIMS’ public presentation here and see the minutes from the meeting here.

MISSION BikeTexas advances bicycle access, safety, and education. We encourage and promote bicycling, increased safety, and improved conditions. We unite and inspire people and provide a cohesive voice for people who ride bikes in … END_OF_DOCUMENT_TOKEN_TO_BE_REPLACED