About 150 state senators, representatives, spouses and legislative staff donned helmets and mounted bicycles just past dawn in front of the Alamo on the morning of Thursday, August 11, 2011 as they prepared to participate in the 7th annual NCSL Bipartisan Bike Ride,  The ride was co-hosted by Senator Rodney Ellis (D-Houston), Representative Linda Harper-Brown (R-Irving), Senator Jeff Wentworth (R-San Antonio), and Representative Leticia Van de Putte, and executed by staff of BikeTexas at the National Conference of State Legislatures.

The participants who rode the scenic, twelve mile tour of San Antonio’s five historic missions included 8 state senators and 30 state representatives from 20 states (plus Puerto Rico, Nigeria, Taiwan and Canada), their families and staff, and sponsors Wal-Mart and BNSF Railway.

Senator Ellis, a host of the ride since its inception in 2005, said, “The bike ride has become one of the highlights of the annual legislative summits, and has cast cycling in a very positive light among my colleagues”. 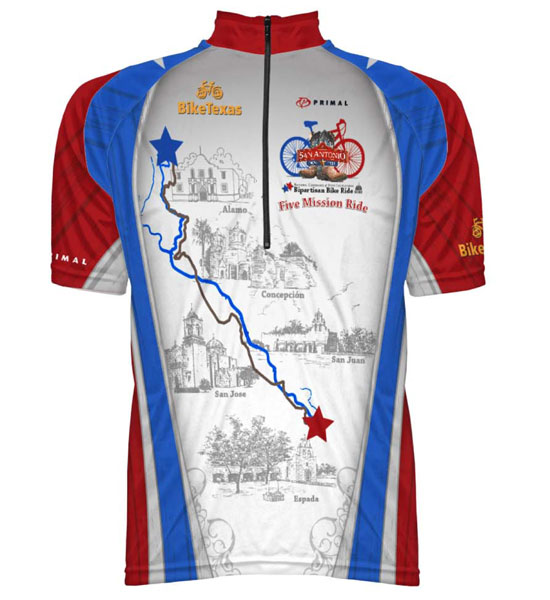 This years ride was even more special, as the riders received a jersey designed just for the ride, thanks to generous support from BikeTexas business member Primal Wear.  The jersey features a map of the five missions, and received an enthusiastic reception from the participants!

BikeTexas founded the NCSL Bipartisan Bike Ride in 2005 at the request Senator Rodney Ellis. Each year since 2005 BikeTexas staff has taken its fleet of bikes, 92 in 2011, to the NCSL Annual Legislative Summit. Since the NCSL Summit is in a different state every year, BikeTexas partners with a local bicycle advocacy group to make the ride a success. This year, San Antonio’s Bexar Trails provided volunteers and experienced cyclists as ride marshals, and local bike shop Bike World provided bikes and expert mechanics to assist with the ride.

MISSION BikeTexas advances bicycle access, safety, and education. We encourage and promote bicycling, increased safety, and improved conditions. We unite and inspire people and provide a cohesive voice for people who ride bikes in … END_OF_DOCUMENT_TOKEN_TO_BE_REPLACED