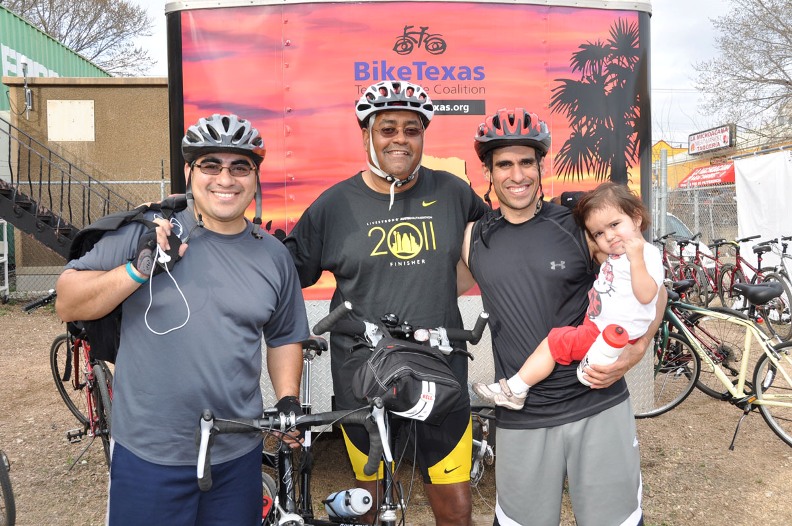 A group of Capitol staffers and elected officials came out to BikeTexas on February 20, 2011 to participate in a Wellness Ride. Organized by Senator Rodney Ellis and Representative Eddie Lucio, III, the ride took a group of nearly sixty cyclists on a six-mile ride around downtown Austin. Representative Armando Walle also rode with the group. BikeTexas led the ride and provided helmet fitting and loaner bicycles to many of the participants.

Many participants admitted that riding a bike was a distant childhood memory. Despite initial concerns, everyone was able to navigate Austin’s bike lanes and cycle tracks with the group without incident. Staffers and interns chatted and enjoyed the balmy spring-like weather. One, still getting used to braking and shifting gears, joked that, “This is like walking and chewing gum. I can’t talk right now. I’m just trying to keep going.” 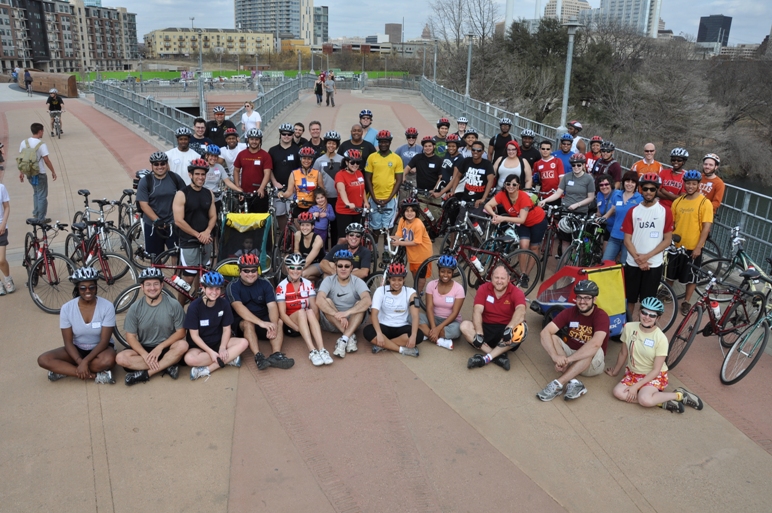 The ride gave staffers a new way to look at getting around in Austin. It passed the new Saltillo Station for the Capital Metro Commuter Rail on East 5th Street, took the Lance Armstrong Bikeway on 4th Street and wound through downtown to cross the river at the South 1st bike and pedestrian bridge. The group took a photo on the Pfluger Bridge, and then tried out the new bridge addition down to the Lance Armstrong Bikeway. They came back through the Lady Bird Greenbelt by Fiesta Shores. BikeTexas staff provided instruction in safe cycling and bicycle handling throughout the ride, and by the end, many staffers had become much more confident cyclists.

Everyone was supportive of new riders, and when the group pulled back in at BikeTexas offices on East 6th Street, the current of excitement and contentment at being outside and on a bike on a beautiful day was still strong. “Representatives Lucio and Walle,and Senator Ellis have led by example. Because of their leadership, all of these riders came out and rediscovered the simple joy of riding a bike,” commented BikeTexas Executive Director Robin Stallings.

The ride provided a fresh take on transportation, recreation, and how to have fun in Austin to people who are committed to helping Texas grow and change for years to come. We hope they take the experience with them as they work to shape our state’s future.

MISSION BikeTexas advances bicycle access, safety, and education. We encourage and promote bicycling, increased safety, and improved conditions. We unite and inspire people and provide a cohesive voice for people who ride bikes in … END_OF_DOCUMENT_TOKEN_TO_BE_REPLACED