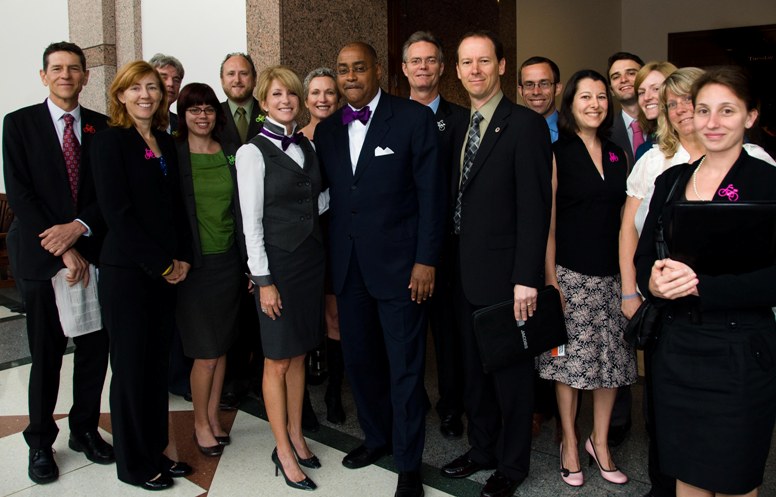 The Senate Transportation and Homeland Security Committee heard SB 513 — the Senate companion to the Complete Streets bill in the House — on Wednesday, April 13.

If passed, the bill would require the Texas Department of Transportation (TxDOT) to consider all modes of transportation when designing roads built with state and federal funding. Examples of such design might include bike lanes, crosswalks, sidewalks and space for buses to stop without impeding the flow of traffic.

Bill author Sen. Rodney Ellis laid out a substitute bill to the committee Wednesday. Updated bill language redefines the term “excessively disproportionate,” which is one situation where the complete streets policy would not need to be considered in a construction or renovation project. “Excessively disproportionate” is defined as more than 5 percent of the entire project’s cost, whereas it was previously defined as more than 20 percent.

“That is defined as more than 5 percent of the total project cost or the sparseness of the population indicates absence of future need,” Ellis said. “The exemptions must be approved by the commission and local authority and supported by publicly available documentation.”

Lauren Dimitry, a health policy coordinator for Texans Care for Children, spoke of the state’s growing obesity epidemic. Obese children will grow up to be obese adults, which will add to the state and employers’ healthcare costs, Dimitry said. By creating a network of bike paths and sidewalks, children will feel safe enough to walk or bike to school and to other places.

Carla Penny, a volunteer member of AARP’s National Policy Council, spoke of Complete Streets helping senior citizens keep their independence. Penny pointed out that when seniors become unable to drive, they will not be able to live independently if there are no sidewalks, bike paths or access to mass transit near their homes.

Mark Mathews, HNTB’s Director of Urban Planning and Design for south and central Texas, which works with TxDOT on many construction projects, also testified. The complete streets policy is important for the future of Texas, said Mathews, because providing infrastructure for biking and walking will be the building blocks for future construction projects.

Jim Wilson, a city council member in Benbrook, Texas, discussed the benefits of complete streets to cities. Citizens have a right to safe, accessible transportation to enhance their quality of life. Wilson noted that cycling and walking are not only recreational activities and can be methods to commute to work, to local shops and for errands.

No testimony was offered in opposition to the bill. The bill was left pending by the committee.

MISSION BikeTexas advances bicycle access, safety, and education. We encourage and promote bicycling, increased safety, and improved conditions. We unite and inspire people and provide a cohesive voice for people who ride bikes in … END_OF_DOCUMENT_TOKEN_TO_BE_REPLACED