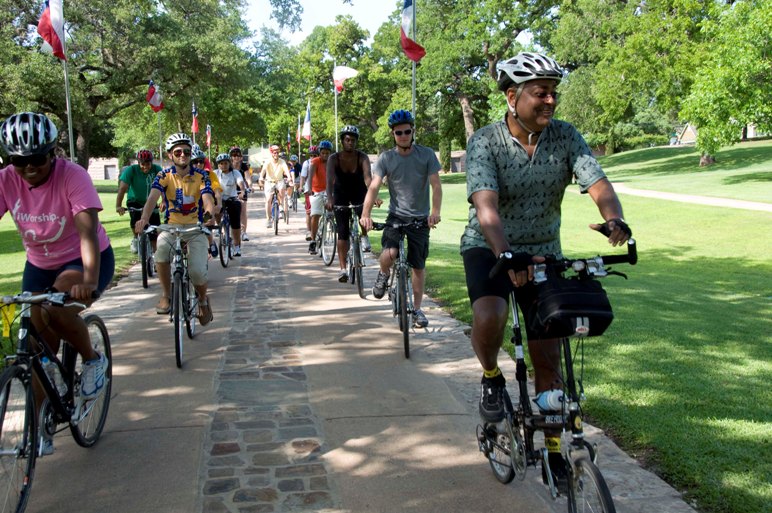 The Superintendent of the Texas State Cemetery attempted to ban cyclists from riding through the scenic cemetery. Although there was no explicit reference to bicycles in HB 2091, the bill analysis cited problems the cemetery has had with “an increase in bicycle traffic, which some claim has led to disruptions of tours, ceremonies, and other events.”

We feel that bicycles are a great way to experience this historic place and believe claims that cyclists have been disrespectful are exaggerated.  Of course, it is always importantfor visitors using any mode of transportation to show respect in a cemetery.

BikeTexas Executive Director, Robin Stallings and Hill Abell, owner of Bicycle Sport Shop in Austin testified against the bill in a senate committee after it passed the House.  The bike ban from our state cemetery seems to be stopped for now.  We are proud of this achievement, especially because it could have set a bad precedent – the road through the cemetery is a state road, funded by Transportation Enhancement dollars under Governor Bob Bullock.  We feel it would have been especially inappropriate to ban bikes on road funded with “bike” money

For more information about the controversy, see these two articles from the Austin American-Statesman.

MISSION BikeTexas advances bicycle access, safety, and education. We encourage and promote bicycling, increased safety, and improved conditions. We unite and inspire people and provide a cohesive voice for people who ride bikes in … END_OF_DOCUMENT_TOKEN_TO_BE_REPLACED