You are here: Home / About Us / BikeTexas Staff / Robin Stallings 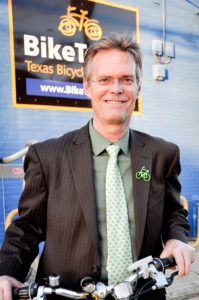 Robin is the Executive Director of BikeTexas, the statewide bicycle advocacy and education organization. He has been with BikeTexas since 1999, making the transition to ED in 2003. During Robin’s time as ED, BikeTexas has celebrated successes in Safe Passing Laws, now in place in 14 Texas cities; Complete Streets policies in multiple jurisdictions across the state; publishing the 2012 Texas Benchmark Report; producing an acclaimed biannual state conference for bicycling and walking; introducing cycletracks to Texas; encouraging Texas cities to put on open streets (ciclovía) events; training over 7,000 Texas teachers in the SafeCyclist curriculum, who have in turn reached approximately two million Texas schoolchildren with bicycle and pedestrian safety; and working with the Texas legislature towards Safe Routes to School, Safe Passing, and Complete Streets, and anti-texting while driving laws.

Robin has served as chair of the TxDOT Bicycle Advisory Committee and was a founding board member of Envision Central Texas, the Safe Routes to School National Partnership, and the Institute for Transportation and Development Policy. Robin particularly enjoys getting transportation engineers and policy makers to take their first bike ride in decades during BikeTexas VIP rides and seeing them rediscover the joys of riding a bike.

MISSION BikeTexas advances bicycle access, safety, and education. We encourage and promote bicycling, increased safety, and improved conditions. We unite and inspire people and provide a cohesive voice for people who ride bikes in … END_OF_DOCUMENT_TOKEN_TO_BE_REPLACED